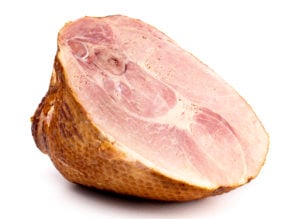 Four recipes, from the simplest to the most fussy.

This ham is delicious. It’s fully cooked. The flavor will stand on its own even without doing anything to it. You could slice it and serve it cold.

Or just warm it up in a roaster with 2 cups water in the bottom, which will keep it from drying out.

Laura’s family made this every other Sunday growing up. Super quick, yummy & easy!

Throw it all together in a roaster, or the oven covered in foil. Bake for 2-2 1/2 hours, Shovel the good stuff on top a few times for good measure. Slice and serve.

This is Carmen’s family recipe

Pat ham dry. Stud with cloves if you’re fancy that way. Glaze. Tent with tin foil. Baste as you go.

This is the one I’m goin’ for!

Pat ham dry. Score in criss/cross pattern to let the goodness soak in down through the meat. Brush with glaze. Tent with tin foil. Bake @ 325 degrees for about 18-20 minutes per pound. (about 2-2/12 hours)

The last 20 minutes, increase oven temp to 425 degrees. Baste with more glaze, arrange orange slices to roast and caramelize on top or next to your ham. Baste again after 10 minutes. Slice and serve.